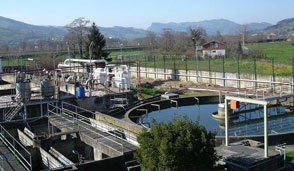 SAVING WATER: The La Penilla factory has dramatically reduced its water use.

A combination of new technology and employee awareness training has enabled a Nestlé factory in La Penilla, northern Spain to reduce its water use per tonne of product by almost two thirds in less than 12 months. SAVING WATER: The La Penilla factory has dramatically reduced its water use.

It is just one of a number of water-saving initiatives the company has introduced at its factories around the world over the past decade: allowing it to reduce total water withdrawal in absolute terms by almost one third, while increasing production, so that water use per tonne of product has actually been halved.

Nestlé aims to further reduce water withdrawal per tonne of product by two fifths by 2015, compared to 2005.

At the beginning of last year, Nestlé’s factory in La Penilla, which makes chocolate, confectionery, milk and infant formula, was using 72 cubic metres of water per tonne of product.

Now, after introducing changes such as a water efficiency programme, and investing one million euros (CHF 1.2 million) it has reduced this by 60% without increasing energy consumption or greenhouse gas emissions.

“At the beginning, it was challenging to change the habits of the operators, who were used to working in a specific way,” explained Ramon Montserrat, Head of Engineering and Packaging Services for the Iberian Region.

“We convinced them by explaining the project and why we care about saving water.”

A team of engineers, environmental sustainability experts and the factory manager at La Penilla helped to analyse how the site could reduce its water usage.

The amount of water flowing through the condensers of the milk evaporators, for example, was regulated in a more efficient way to achieve the required vacuum on the equipment.

This single and simple modification has led to a reduction of more than 1,000,000 cubic metres of water per year, the equivalent of 400 Olympic swimming pools.

The factory also installed three new cooling towers with a more efficient closed refrigeration loop system, which recycles water, leading to an additional 25% less water being used in the first half of 2013.

The increased water efficiency has also made business sense by reducing water costs.

Water is essential to Nestlé’s operations and the company is committed to being the most efficient water user among food manufacturers. It closely monitors water impact and use in all its factories.

The La Penilla factory is just one of many cases where Nestlé is using both simple changes and cutting-edge technology to reduce water withdrawal and increase its efficient use.

In Mexico, where water is scarce in many areas, a project in the company’s Lagos de Moreno factory collects water that condenses during the milk evaporation process and recycles it for use in other parts of the site. The project will save an estimated 546,000 cubic metres of water, the equivalent of more than 200 Olympic swimming pools of water, by the end of 2014.

In 2013, Nestlé published its Commitments on Water Stewardship (pdf, 198Kb), highlighting the importance of water access and conservation.