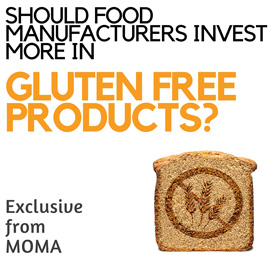 Over the past few years we have seen ‘free from’ shelves popping up in supermarkets across the UK. With more and more people being diagnosed with Coeliac disease and gluten free diets being made popular by celebrities such as Gwyneth Paltrow, the demand for gluten free products continues to rise.

Despite gluten free products becoming more readily accessible for those who do not have a prescription, the variety of products still remains minimal. MOMA recently conducted a survey of people who regularly buy gluten free products to find out what they thought about the range of products available. The survey showed that over 70% of consumers didn’t think there was enough choice when it comes to gluten free lines.

With such a huge percentage of consumers being unhappy with the range of ‘free from’ foods, is it time food manufacturers invest more into the production of gluten free products?

We’ve already seen the variety of gluten free breads increase, with brands like Genius and Biona providing a multitude of different types of sliced loaves. However, when it comes to other forms of gluten free products like pasta, pizza, biscuits and cakes, the variety still remains very limited and usually there is only one type to pick from.

When asked, the survey participants explained that not only is there limited types of pasta and cakes, but the prices on those products are a lot higher than their non-gluten free counterparts. The lack of choice in supermarkets makes it a lot harder for those that need to follow a gluten free diet for health reasons, such as Coeliac disease. It ultimately limits their diet to the same foods and can arguably make a bad situation worse and harder to deal with day to day.

One of the main incentives for food companies to produce more gluten free products to their already established ranges, has been the increase in those following gluten free diets because they think it is ‘healthier’ than a diet that does include gluten. This new ‘trend’ has been brought to fruition thanks to celebrities such as Gwyneth Paltrow, Miley Cyrus and Victoria Beckham, all using gluten free diets to keep their trim figures. Despite this new diet craze causing some controversy in the Coeliac community, it has spurned a new demand for gluten free products, meaning food manufacturers are now making more than ever.

It was not long ago that gluten free food could only be bought by those who had a prescription, and even then products were hard to come by. Now that these products are readily available in local supermarkets, it could be argued that we’ve come on leaps and bounds in gluten free product production in the last few years. However consumers are demanding more and a small corner of a store is not enough to give those who have no other option than a gluten free diet, a full and varied diet.

Those who suffer with Coeliac disease and other wheat or barley intolerances should have the same variety as those who can follow a regular diet. Despite restaurants and other eateries slowly introducing gluten free dishes and snacks to their menus, the options still remain limited, again taking away the freedom of those with intolerances. We must acknowledge how far food manufacturers have come in the past 3+ years, but now that more and more people are choosing gluten free diets for both health and medical reasons, it’s time to speed up the process and really strive to meet consumer needs.

One response to “Should food manufacturers invest more in gluten free products?”