Mycotoxin contamination poses an intractable problem in agricultural production. WHO estimates that over 25% of global food crops are significantly contaminated with mycotoxins causing annual losses of around 1 billion metric tons of food. Mycotoxins are formed during cereal growth or in post-harvest storage; so this problem may increase as a result of climate change with weather extremes favouring plant stress and mould growth. 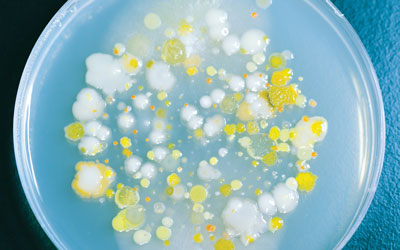 Mycotoxins are secondary metabolites of filamentous fungi which commonly contaminate agricultural crops including all major cereal grains as well as ground nuts and fruits. Over 300 mycotoxins have been identified but the predominant species that lead to mycotoxin contamination in cereals are Aspergillus, Penicillium and Fusarium. In temperate climates such as Europe and North America, Fusarium moulds are the most common fungal species producing a host of Fusarium mycotoxins. Among them trichothecene mycotoxins comprise the most important group in terms of prevalence and contamination levels. While type A trichothecenes, namely T-2 and HT-2 toxin are more potent toxins, it is the type B trichothecenes, especially deoxynivalenol and nivalenol, that are most commonly detected in cereals. Furthermore, zearalenone and fumonisons are a commonly detectable Fusarium mycotoxin.

The main toxic effects of low and moderate trichothecene exposure are gastrointestinal disturbances, impaired intestinal barrier function and impaired innate immunity. Fumonisins interfere with cellular synthesis of glycol-sphingosines and cause liver and kidney toxicities whereas zearalenone possesses weak oestrogenic activity. Based on intensive toxicity studies in experimental and farm animals and applying safety factors to ensure safe consumption for humans, tolerable daily intakes (or TDIs) are calculated for several mycotoxins. The TDI estimates the quantity of mycotoxin (expressed as μg/kg body weight/day) which someone can be exposed to daily over a lifetime without it posing a significant risk to health.

Mycotoxins are highly stable compounds and their carry-over and persistence in the food network is of major concern. Wheat and maize are the most significant sources of Fusarium mycotoxin contamination. A large European scientific cooperation1 gathered almost 45,000 results for Fusarium mycotoxins in various foods from 13 EU countries. Results showed that 89% of maize samples and 61% of wheat samples contained deoxynivalenol, whereas nivalenol was found in 35% of maize, 21% of oat and 14% of wheat samples. T-2 toxin and HT-2 toxin were detected in maize (28 and 24% of all samples), oats (21 and 41% of all samples), wheat (21% contain T-2 toxin) and rye (17% contained HT-2 toxin). Fumonisins were present in 66% of maize samples and 79% of wheat samples whereas zeralenone was found in maize (79%) and wheat (30%).

Human health risks depend on the mycotoxin toxicity, contamination level and the quantity of contaminated food consumed. Based on ML in foods and food consumption data, risk of mycotoxin exposure can be calculated on a population level. With average cereal consumption the maximum permitted levels for mycotoxins in food will protect the population from exceeding the TDI and therefore suffering toxic effects. However, several factors will still need to be considered:

We need to develop a better understanding of these points to ascertain that the potential health risk for consumers are well managed. We also need to consider the adverse consequences of too strict regulations resulting in immense losses of agricultural produce and waste of food and feed materials. In an age of growing concerns about climate change and food security, these issues become more pressing and governmental actions focussing mainly on the regulatory side are too simplistic to address this intractable problem in agricultural production.

In order to manage their crops effectively and to minimise the risk of mycotoxin contamination, a risk assessment model has been produced for wheat farmers in the UK4. The model is based on identifying and quantifying the parameters which favour the movement of Fusarium sp. in the wheat crop and by implication the risk of mycotoxin development. The first factor to be considered by growers is location. Fusarium fungi prefer warmer humid conditions and although this previously suggested that southern parts of the UK were at higher risk, recent studies have shown damaging levels of mycotoxins from Scottish samples too. The second factor to be considered by farmers is the previous crop grown in the field. Crop residue can often act as a source of disease for the following crop and wheat crops which follow maize are often at high risk. The third factor for consideration is the cultivation system used in the field. Ploughing and burying of crop residue is the most effective way of preventing disease crossover into new crops however there is great interest in alternative cultivation techniques. These offer the benefits of reduced on-farm energy costs (lower carbon budget) and may help encourage the formation of a better soil structure. These advantages have to be weighed against the danger of disease crossover.

Disease control in wheat relies on a combination of the inherent genetic resistance within the plant and the timely use of effective agrochemicals. Wheat varieties do differ in their resistance to the Fusarium fungi, although on the list of varieties recommended to UK farmers only one is classed as fully resistant and many are very susceptible5.This means that a majority of farmers will use a fungicide spray after the wheat ear emerges to give it protection from the fungus. The performance of fungicides against Fusarium head blight is monitored on an annual basis in order to give growers up to date information on the best chemicals to use and the control which can be achieved by various doses. The last two factors which affect the risk of contamination in the crop are weather during the period the crop is flowering and just before harvest. Heavy rainfall leads to the fungus being disturbed from the soil and base of the plant and subsequently infecting the ear. During flowering the ear is more susceptible to fungal colonisation and at harvest the ears can be contaminated by a number of fungi e.g Fusarium sp., Cladosporium sp. and Alternaria sp. in moist conditions. The run of wet summers, culminating in the extremely wet summer of 2012 has lead to increased concern about Fusarium head blight.

The factors encountered during the growing season are used to calculate a risk score and this is attached to each grain sample so that processors are aware of the mycotoxin risk from each grain sample.

Studies of Fusarium head blight at the end of the last century indicated that non toxin producing fungi, such as Microdochium nivale and toxin producers, such as F. culmorum and F. poae, dominated. But this has now changed, and other toxin producers, i.e. F. graminearum and F. langsethiae are increasing in abundance. This could be related to climate fluctuations over the last quarter of a century. Research is ongoing into providing farmers with information on the movement of Fusarium spores on a regional level during the growing season so that they can maximise the effectiveness of their final fungicide application.

In conclusion, the increased awareness of the problem and dangers caused by mycotoxins in the food chain from farmers, processors and ultimately end users, will ensure careful monitoring of both risk and control for many years to come.

Dr Silvia W. Gratz has been a Research Fellow at the Rowett Institute of Nutrition and Health, University of Aberdeen since 2007. She holds a PhD in Food Toxicology and has a 14-year track record in mycotoxin research. Current interests include assessing the role of gut microbiota in degradation of masked mycotoxins and detoxification of mycotoxins. Furthermore she investigates human mycotoxin exposure via the food chain and uses urinary mycotoxin excretion as exposure biomarker.

Dr Neil Havis is a Researcher in Crop and Soil Systems Group at Scotlands Rural College. He has 20 years’ experience in researching crop diseases. Current interests include risk forecast systems to control barley and oilseed rape diseases, novel control methods and understanding the relationship between fungus and host plant.

Dr Fiona Burnett is the Head of the Crop and Soil Systems Group at Scotlands Rural College. She has over 20 years’ experience in applied plant pathology in cereals, oilseed rape and potatoes. Her current interests include understanding the risk factors leading to disease, plus developing risk assessments to decide on appropriate treatments, as well as integrated ways of reducing the disease burden in crops.