Live monitoring of mycotoxin risk in wheat crops during flowering

Mycotoxins are a human health risk even at low concentrations, but cereals which can contain mycotoxins are a major dietary source, particularly wheat and maize. In this article, we describe monitoring methods that can be practically used in crop production to minimise the risk of contaminated grain reaching the food chain. 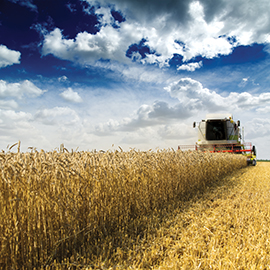 There are 11 mycotoxins (trichothecenes) that are found in UK wheat grain. Deoxynivalenol (DON) is the most frequently detected mycotoxin, present above the limit of quantification. DON is produced by the fungal pathogens Fusarium graminearum and F. culmorum, which along with other closely related fungi, cause fusarium head blight (FHB) in wheat and which can be detected in crops around the milky ripe stage as premature ripening (bleaching) of individual spikelets (see Figure 1, page 64). Legislation was introduced in 2006 to set out the maximum limit for mycotoxins in cereals and cereal products for human consumption, which for DON is set at a maximum of 1,250µg/kg for unprocessed cereals (other than durum wheat).

In the field, fusarium infection occurs when fungal ascospores (and also macroconidia) land on susceptible wheat heads. Extruded anthers during flowering are thought to be the site of primary infection. High rainfall at flowering increases fusarium infection risk and high rainfall near to harvest increases risk of mycotoxin development. It is well established that FHB infections are closely linked to wet conditions during the flowering period and for the majority of UK wheat crops flowering occurs in early June. FHB infection is favoured by extended periods of high moisture or relative humidity (>90%) and moderately warm temperatures (between 15-30°C). Once infection has occurred, further rainfall and humid conditions up to harvest will allow secondary infection to occur, facilitating further fungal growth and mycotoxin production.

There are a number of agronomic (crop production) factors that can influence the risk of fusarium infection and subsequent risk of mycotoxin development in crops. In the UK, there has been a focus on research to develop a risk assessment to help farmers under stand the factors leading to increased mycotoxin levels in grain. The main agro nomic risk factors which are under the control of the farmer are summarised in Figure 2 (page 65). Fungicides are commonly used at flowering to reduce fusarium infection risk, although even well timed applications of an appropriate dose are only able to reduce rather than eradicate fusarium. The efficacy of fungicide use for control of FHB is variable with other factors such as cultivar resistance, fungicide coverage, timing and frequency of applications, and natural variation in aggressiveness of individual isolates likely to contribute to this variability.

The various agronomic factors that relate to the risk of fusarium infection and subsequent development of mycotoxins in grain have been used to develop the AHDB Mycotoxin Risk Assessment, which should be completed after harvest and accompany each grain consignment leaving the farm. Some aspects of the risk assessment, such as previous cropping, cultivations, varietal resistance and location are easy for a farmer to access from farm records. However, rainfall and its co-incidence with the timing of flowering is not routinely recorded, so is not easily available at the time of completing the risk assessment, usually after harvest.

For this reason, AHDB have funded a project to provide live monitoring of flowering date and rainfall to give a fusarium infection risk score. The work was piloted in 2014, with a new three year project starting in May 2015. Monitoring runs for a six week period each year from mid-May when the crops reach full ear emergence through to the end of flowering. ADAS UK Ltd is leading the work, with support from a network of independent agronomists and key partners in the grain storage sector. The work aims to provide UK farmers and stakeholders within the wheat supply chain with an early indication of fusarium infection risk for each county, for use in the risk assessment process, with the aim of increasing the accuracy of the mycotoxin risk assessments completed by the UK wheat industry.

ADAS has developed a methodology that links average daily rainfall data for each county with real time flowering progress information, and uses this to determine fusarium infection risk throughout the flowering period with reports published weekly. In terms of rainfall, the model defines low fusarium risk as weekly rainfall below 10mm, moderate risk 10-40mm, high risk 40-80mm and very high over 80mm. These figures are based on the categories used in the existing AHDB mycotoxin risk assessment tool. Daily rainfall data is provided by the Met Office, while live monitoring data on flowering progress is provided by a network of independent agronomists.

An example county chart for the whole flowering period is shown in Figure 3, from data for Lincolnshire in 2014. From this chart, it can be seen that there was a period of high rainfall that coincided with the start of flowering, resulting in approximately 10% of the crop area being deemed to be at high risk of fusarium infection. The majority of crops flowered between the 1st and 11th June, coinciding with a period of showery rain, and moderate infection risk. The late flowering crops (after 11th June), just under 10% of the crop area, were in flower during a period of low rainfall and, therefore, had a low risk of fusarium infection. When completing their mycotoxin risk assessment, farmers can check their crop date of flowering against the chart to improve the accuracy of their risk rating. Other stakeholders can use the chart to establish that most of the grain from Lincolnshire was at moderate infection risk.

A modification to the 2015 reporting is a link to local Met Office weather forecasts for the following week. This project will build a picture of flowering progress in a region, so it can start to give clear warnings of when flowering will occur and when combined with weather forecasts, which will aid farmers in managing high risk crops.

In 2015, the fusarium infection risk methodology, as a predictor of mycotoxin risk, will be validated by comparing the estimated fusarium infection risk scores, with AHDB risk assessment scores and actual mycotoxin test results for DON. Three areas, each with different levels of estimated risk, will be selected at the end of the reporting period. Grain samples will be taken at harvest and tested for DON mycotoxin levels. These will be used to determine the strength of the relationship between the fusarium infection risk estimates and the level of mycotoxins in the samples. AHDB mycotoxin risk assessments will also be completed to understand other risk factors such as previous cropping, cultivations and varietal resistance.

Value to the food industry

This work is of potential value to the food industry in a number of ways, as it will:

Mycotoxins are a serious issue across the UK cereal supply chain, with stringent compliance standards for grain going into human consumption. In most years, mycotoxin levels are low, and there is good understanding of the risk factors in grain production. However, there is a weakness in assessing the level of risk due to fusarium infection at flowering. This project aims to provide the farmer with a tool to address this weakness, enhance the quality of the mycotoxin risk assessment and provide greater confidence in UK grain. The weekly reports provide an emerging picture to help farmers manage their crops appropriately and helps maintain the profile of mycotoxins as an issue to drive improved practices which will avoid contaminated grain reaching the food chain. The reports also provide the industry with early indication of the potential mycotoxin risk to enable them to make appropriate plans for testing and assurance.

Sarah Wynn is a senior consultant at ADAS UK Ltd with a specialism in arable crop production. Her work focuses on applying science at the farm scale to help increase the safety and sustainability of arable crops.

Rebecca Carter is a consultant at ADAS UK Ltd with a specialism in arable crop production.