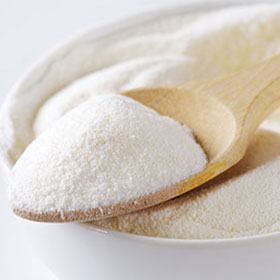 Milk has long been known as an excellent source of nutrition, not only for the neonate, but for people of all ages. In addition to direct consumption in the form of liquid milk, it is also processed into a wide variety of other, widely popular dairy products, such as cheese, yoghurt and other fermented dairy products, all of which are found in a wide diversity of local variants throughout the world. In addition, a wide range of ingredients are produced from milk, including milk fat, lactose and derivatives thereof, such as galacto-oligosaccharides, and a wide variety of milk protein ingredients.

Of the dairy ingredients, milk protein ingredients currently represent the highest economic value, despite the fact that concentrations of lactose and fat are typically higher in milk than those of lactose. Within the wide range of milk proteins, a wide variety of ingredients can be found, isolated either directly from milk or from whey. Milk protein ingredients may consist of high purity individual proteins, protein classes, or blends thereof. In addition, distinction should be made between intact proteins and protein hydrolysates. The latter may be applied in hypoallergenic infant formulas, for example. In the class of milk protein ingredients, milk protein concentrates (MPCs) present a relatively recent arrival. Nonetheless, since their introduction into the market, they have found a wide range of applications, including yoghurt, cheese, processed cheese, ice cream, infant formula, clinical formulations and nutritional beverages. Both more extensive use within these product categories and expansion into other product categories remains ongoing, further expanding the success of this class of ingredients. Within this range of applications, MPCs confer a wide range of functionalities, including emulsification, viscosity, gelation and water binding.

Within the market, MPCs with a variety of protein contents are available, ranging from 56-85% protein in dry matter. In addition, milk protein isolate (MPI) with at least 90% protein in dry matter is available. Typically, MPCs are denoted with their protein content. For instance, MPC60 and MPC80 contain 60% and 80% protein respectively, on a dry matter basis. With increasing protein content, lactose content decreases, whereas ash content remains constant (Figure 2). The constant ash content is due to the fact that parts of the minerals are removed in the serum, but part is also bound to the proteins and therefore concentrated. Within the process of producing MPCs, the main variables are the extent of heat treatment applied to the milk, the degree of concentration and diafiltration applied, the dry matter content achieved in evaporation and the conditions applied during spray drying. The combination of these factors determines the ultimate compositional and functional properties of the product, which vary widely between commercial samples.

A survey conducted by NIZO food research on 32 commercial samples of MPCs highlighted strong differences between MPCs, both from a compositional as well as a functionality perspective. Within this survey, 32 samples were collected from suppliers in North America, Europe and Oceania to provide a representative overview of the market. MPCs with declared protein contents from 56%-85% protein in dry matter were included in the survey. Samples were collected fresh from manufacturers and subsequently analysed for compositional properties (gross composition, mineral composition, protein composition), powder properties (particle size, dispersibility, bulk density), physicochemical properties (pH, protein denaturation), solubility, as well as functional properties (emulsification, acid gelation, foaming, suspension stability, and heat stability). In addition, changes in properties, most notably solubility, were also monitored during storage for 12 months. The aim of the survey was to gather insights into variations throughout the MPC market and to evaluate regional differences in MPC quality.

Figure 3 outlines the extent of variation observed in the survey of commercial samples of MPCs in all aspects. The variation in protein content from 55-85% outlines that the entire commercial spectrum of MPCs was included. Large variations were observed in powder moisture, calcium and sodium content, but, for all of these, no direct correlation was observed with protein content of the powder. The level of denaturation of the main whey protein, β-lactoglobulin, varied from 20-80%, i.e. from low heat to high heat when considering them as milk powder equivalents, which impacts functional properties and solubility. Protein denaturation may have occurred during various stages of processing, i.e. during heat treatment, evaporation and drying. Like all protein ingredients, solubility is the crucial prerequisite for functionality of the ingredient. Solubility was determined as both dispersibility of the powder and the nitrogen solubility index (NSI – the solubility of the protein fraction alone). For both parameters, a large variation was observed within the survey, from very low to very high values.

For solubility as determined by the NSI, a negative correlation was observed between protein content of the MPC and NSI; meaning high protein MPCs were found to have a lower NSI than low protein MPCs (Figure 4). However, it should also be noted that for a given protein content, large variations in NSI were observed. For instance, for MPCs with protein contents in the range 80-85%, NSI values ranging from <25% to >80% were found, indicating extremely large differences between MPCs. Further to these differences in solubility apparent soon after manufacture, solubility also was found after storage of the samples. Particularly high protein MPCs were found to be prone to loss in solubility during storage (Figure 5). Further study, on a set of MPCs with varying protein contents prepared under controlled conditions from a single batch of milk has confirmed that high protein MPCs are more prone to losses in solubility. These losses in solubility are accelerated strongly at higher storage temperatures. Such effects are particularly relevant considering that most MPCs are produced in Oceania, North America and Western Europe and a large proportion of these products are exported by boat to Asian markets. Hence, temperatures of >40°C are not uncommon during transport of MPCs.

Considerable research effort in both industry and academia has been dedicated to understanding factors causing reduced solubility of MPCs and possible solutions to the problem. Primary areas of attention here have been the influence of drying conditions, pH and mineral balance. As outlined in Figure 6, powder particle structure of high protein MPCs differed considerably from those of skim milk powder. MPCs showed smaller powder particles, less agglomeration, as well as a partial collapse of powder particle structure, all of which could hinder reconstitution. Because of the higher protein content and lower lactose content of MPCs, the concentrate before drying has a lower solid content than a skim milk concentrate before drying. As a result, different drying patterns will arise. A further consideration in choosing suitable drying conditions is the low heat stability of MPCs due to an inherently high calcium ion activity. Hence, high temperature, for example during drying, combined with high protein content can lead to extensive heat-induced coagulation of proteins, which is a major cause of poor solubility of MPCs. Reducing calcium ion activity by pH control, for example, the addition of a calcium binding agent or the removal of calcium by treatment with an ion exchange resin, present options for increasing stability of MPCs to heat induced coagulation. Figure 7 shows how the heat stability of MPCs, as determined by the heat coagulation time at pH 6.7 for suspensions containing 3.5% protein, is affected by the protein content of MPC powder. Whereas low protein MPCs, like skim milk, can be heated extensively at this temperature, high protein MPCs are highly susceptible to heat coagulation at this temperature, which should be taken into account when applying these products in beverages which are subjected to sterilisation or UHT treatment. A wide variation in heat stability was also observed when heating the commercial MPCs from the benchmark study at a protein content of 3.5% at 140°C at their natural pH (Figure 8). Heat coagulation times varied from zero to >40 minutes. Similarly large variation was observed in the hardness of yoghurt-type gels (Figure 9) and the viscosity (Figure 10) of suspensions of the 32 commercial MPCs.

The wide variation observed in functional properties of MPCs necessitates both careful process control by the manufacturer and careful ingredient selection by the end user. The main factors controlling this are schematically outlined in Figure 11. The final desired functional properties like emulsification, gelation, heat stability or foaming are the key selection criteria for the end user. In achieving any of these, solubility of the powder is naturally key. Again, it should be noted that storage time and temperature are strong determinants here. Compositional and physicochemical properties like protein and mineral content and composition, protein denaturation and moisture content are strong determinants here. These in turn are strongly influenced by both initial milk composition and quality and by the conditions applied during the processing steps (heat treatment, UF, evaporation and spray drying). When applied properly, these processing steps facilitate the creation of a range of MPCs with excellent functionality. However, a cautionary note is also required that compared to skim milk powder, for example, MPCs are far more susceptible to processing induced instabilities. Therefore, MPCs and related products are likely to remain a key product category of research in both academic and industrial research from a processing and functionality perspective.

Dr Thom Huppertz works as a Principal Scientist, Dairy and Ingredient Technology at NIZO food research (Ede, the Netherlands). He holds an MSc in Dairy Science from Wageningen University (The Netherlands) and a PhD in Dairy Science from University College Cork (Ireland). His research focuses on the physical chemistry of dairy products, with particular emphasis on the protein functionality and product-process interactions. In addition, he is an Adjunct Professor in Dairy Science and Technology at South Dakota State University and Editor of the International Dairy Journal.

Inge Gazi is a Project Leader at NIZO food research (Ede, the Netherlands). Her work focuses on protein functionality, with an emphasis on dairy proteins. She has a BSc in Food Science and Engineering from ‘Dunarea de Jos’ University (Romania) and an MSc in Dairy Science and Technology from Wageningen University (The Netherlands).