Campbell Soup Company will outline its progress on its growth strategies… 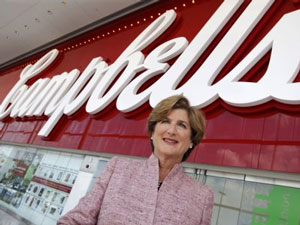 Campbell Soup Company (NYSE:CPB) will outline its progress on its growth strategies and its plans to return to growth in fiscal 2013 at a meeting with investors led by President and Chief Executive Officer Denise Morrison. A web cast of the presentation will be available at investor.campbellsoupcompany.com beginning at 9:00 a.m. Eastern Daylight Time today. Morrison said, “We’ve made progress in this fiscal year, and we will continue to advance our core strategies for growth in fiscal 2013. Our strategic framework is a roadmap to drive smart, meaningful and successful change at Campbell. We will tend very carefully to our core business, while we shift our center of gravity toward new consumer groups, new consumer needs, new consumer platforms and new geographies.”

Morrison and other members of Campbell’s management team will outline plans to continue to implement these strategies in the upcoming fiscal year.

Mark Alexander, President Campbell North America, will outline plans to stabilize and profitably grow North America soup and simple meals by leveraging all the drivers of consumer demand across its portfolio, including new product innovation, compelling marketing and merchandising. Campbell plans to introduce more than 50 new products in its U.S. Simple Meals business in fiscal 2013—ranging from new varieties of “Chunky” and “Campbell’s” condensed soups to delicious new soups under the “Campbell’s Go” platform and “Campbell’s” Skillet Sauces.

Alexander said, “We’ve made a step change in our innovation efforts. When you look at what we have on tap for fiscal 2013, you’ll see that our newly implemented innovation program is really starting to bear fruit, helping us fill our pipeline with new products that appeal to our loyal consumers while also reaching new ones.”

In addition, the company will also highlight new advertising to promote enhancements to its line of “Chunky” soups with the return of its Mama’s Boys campaign featuring NFL player Victor Cruz.

Irene Chang Britt, Campbell’s Senior Vice President of Global Baking and Snacking, will share her perspective on opportunities to drive growth through increased collaboration across Campbell’s businesses in North America and Asia Pacific.

Britt said, “We’ve invested both dollars and people into innovation and collaboration, and it is paying dividends. This has led to a track record of growth and share gains in our core markets and will fuel the opportunity to grow beyond our core.”

Alexander will also outline fiscal 2013 plans for U.S. Beverages, including efforts to drive the “V8” 100% vegetable juice business and to fuel continued growth in the “V8 V-Fusion” franchise. Campbell will introduce the first line extensions to “V8” 100% vegetable juice in nearly 10 years, and will also launch “V8 V-Fusion” Iced Teas in lemon and peach flavors, among other new product innovations.

Return to Growth in Fiscal 2013

Craig Owens, Senior Vice President and Chief Financial Officer and Chief Administrative Officer, said, “We expect improvement across our entire portfolio next year. We are doing the right things to continue to improve our trajectory, including a significantly enhanced innovation pipeline. We are making progress with our strategies and are vigorously working to deliver further progress in fiscal 2013.”

Campbell plans to provide more specific guidance for fiscal 2013 when it reports fourth-quarter results on Sept. 4, 2012.