The Carolina Reaper, the world’s hottest chilli pepper, is being commercially grown in the UK for the first time ever and is now available in Tesco stores…. 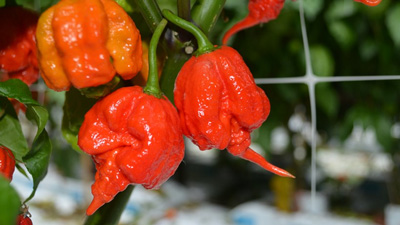 The Carolina Reaper, officially the world’s hottest chilli pepper, is being commercially grown in the UK for the first time ever and is now available in Tesco stores. According to the Guinness Book of Records, the Carolina Reaper measures an average of 1.5 million Scoville units (the measurement for the level of heat in a chilli pepper), however, independent tests have recorded the heat level at a mouth-numbing 2.2 million Scovilles. This makes is some 400 times hotter than a jalapeno.

“Despite it being astonishingly hot it also has a wonderful fruity taste. Only a sliver is needed to add exciting flavour to your favourite curry.”

The Carolina Reaper is being grown by the UK’s largest producer of chilli peppers, Salvatore Genovese whose seven acre farm is based in Blunham, Bedfordshire.

Mr Genovese started growing chilli peppers 15 years ago. Since then chilli peppers have become so popular that he now grows about 15 tonnes each week just to satisfy UK demand.

Commenting on increasing demand for chilli peppers, Mr Genovese said: “Chilli pepper culture has become very popular in the UK over the last five years and on the back of the acclaim I’ve received from supplying Tesco I now get requests from all over the world.”

The Carolina Reaper will be sold as part of Tesco’s new Komodo Dragon brand of super-hot chilli peppers and will be marked with a blue flash label. The Komodo Dragon, which has a 1.4 million Scoville heat rating, was Tesco’s most popular chilli pepper last year.