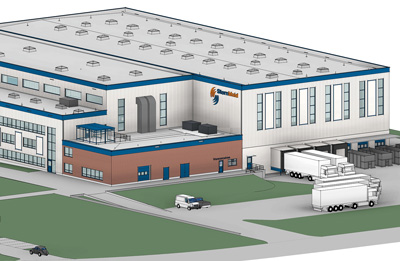 SternMaid has announced that it plans to start construction work on a second production plant for powdered foods and food supplements later this year.

A production and warehouse complex with a floor area of 5,000 m² will be built opposite Plant 1 at the company’s Wittenburg site. With a total area of 40,000 m² the site has further reserves for subsequent construction phases.

SternMaid says the present factory offers no more room for expansion, especially since a new blending line with automatic weighing of raw materials was commissioned last month, greatly enlarging the company’s capacity. It was this continuous increase in capacity utilisation that led the company to invest €15 million in a second plant.

SternMaid says the base area of the new buildings will be made up of about 2,500 m² for warehousing, 2,000 m² for production and 500 m² for technical equipment. As far as possible the two plants will work independently of each other with Plant 1 focusing on all products intended for further industrial processing and Plant 2 manufacturing retail products. For this reason, the small-pack filling lines currently in use will move into the new plant in 2017. The floor space released will be converted into blending and filling areas for industrial products. SternMaid says the separation of the two types of production will ease logistics on site.

Commenting on the announcement, Torsten Wywiol, CEO of SternMaid, says: “Blending is our mission. In 1999 we started with lines 1 and 2, and now line 8 has recently been commissioned. SternMaid is all set for growth, so that we shall continue to meet the demand for powder mixtures in full. Construction of the second plant will enable us to serve our retail customers and meet their requests even better in future.”