Berrypom: the project to turn blackcurrant pomace into food

The goal of Berrypom is to exploit the nutritional and economic value of pomace, which consists of the skins, pulp, seeds, and stems of berries… 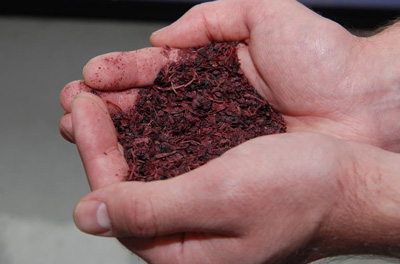 Food scientists at the University of Huddersfield have enlisted the aid of Lucozade Ribena Suntory as they carry out Government-funded research into how a fruit by-product could enrich the fibre content of bread by up to 15%. The company has provided samples of “pomace” – the material left after the blackcurrants have been pressed for juice – to support Dr Vassilis Kontogiorgos, Professor Grant Campbell and Dr Katerina Alba in carrying out the UK’s contribution to a Europe-wide project named Berrypom.

The goal is to exploit the nutritional and economic value of pomace, which consists of the skins, pulp, seeds, and stems of berries after juicing.  It can account for up to 30% of the product, but has so far had limited use and is often discarded.

However, the pomace is a potentially rich source of polyphenols and fibre and therefore researchers in five European countries plus New Zealand have come together for Berrypom, which seeks to find methods of introducing it into cereal products, including bread, muffins, biscuits and breakfast foods.

The University of Huddersfield team is concentrating on ways to introduce the pomace into bread dough and the effects of this on taste and colour.

“We are aiming for an increase in fibre content of up to 15%,” explained Dr Kontogiorgos, “and except for the colour you can’t tell the difference.”

Early findings are that flavour is hardly affected by the introduction of pomace, but bread and muffins can acquire a dark colouration.  Therefore, ways to lighten the colour of the blackcurrant by-product are being explored.

Berrypom is a 36-month project

Berrypom is a 36-month project that had a launch meeting at Lunds in Sweden, and there has been a follow-up session at Huddersfield.  The multi-national team will assemble again later in 2016, in Spain.

The University of Huddersfield component of Berrypom is greatly aided by the collaboration with Lucozade-Ribena Suntory to arrange samples of blackcurrant pomace for the laboratory-based research. The prospect is that in future the company will have a valuable new use for the bi-products of the blackcurrants it uses in its famous brand Ribena.

At Huddersfield, extraction techniques are used to produce soluble dietary fibre from the coarse pomace.  Most of the lab work is being carried out by Dr Alba, appointed as research fellow for the project, having recently obtained her PhD at the University, supervised by Dr Kontogiorgos.