Scientists observe 3D image of the nano structure of food

In a groundbreaking study, researchers have, for the first time, created a 3D image of food on the nanometre scale… 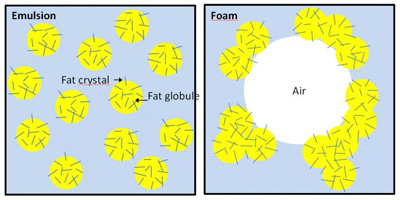 In a groundbreaking study, researchers have, for the first time, created a 3D image of food on the nanometre scale.

Their research has promising prospects as a more detailed knowledge of the structure of complex food systems could potentially save the food industry large sums of money.

The researchers used a cream based on vegetable fat for the research. The researchers explained that the cream system is a good test material, since it can represent the structures of a large group of food systems, for example cheese, yoghurt, ice cream, spreads, but also the more solid chocolate. All the aforementioned products contain liquid water or fat as well as small particles of solid materials, which stick together and form three-dimensional structures – i.e. a network that provides the consistency that we like about cheese, yogurt or chocolate. In cheese and yoghurt the casein particles form the network. In chocolate it is the fat crystals and in ice cream and whipped cream it is the fat globules.

To create a three-dimensional model of the food and convert it into images and video, the scientists have been in Switzerland, where they have used the Swiss Light Source (SLS) synchrotron at the Paul Scherrer Institute. In the synchrotron electrons are accelerated to near speed of light. The synchrotron is used for research in materials science in areas such as biology and chemistry. The method the researchers used is called “Ptychographic X-ray computed tomography.” This is a new method for creating images on the nanometre scale, which also provides a high contrast in biological systems. This was the first time ever that the synchrotron was used within food science.

“We have been using the tomography principle, also known from an X-ray CT (computed tomography) scanner. The sample of the food system is rotated and moved sideways back and forth with nanometer precision, while we send a very strong and focused X-ray beam through it. The X-rays are deflected by colliding with electrons in the food, and we shoot a lot of pictures of the patterns that the deflected X-rays form. The patterns are combined in a powerful computer, which reconstructs a 3D image of the sample. The Swiss scientists of the team have created a device that can move and rotate the sample with ultra-high precision, allowing us to see the small details,” says Research Assistant Mikkel Schou Nielsen, who has recently completed his Ph.D. in tomographic methods applied to food at the Niels Bohr Institute in Copenhagen. This is a greyscale showing the electron density in various food components in a cream cheese-like food system. The greyscale helps scientists to identify the food components location and structure. (Figure 1). CREDIT: Mikkel Schou Nielsen

The reconstructed 3D image can be described as a three-dimensional table of numbers describing the electron density through the entire sample. The various food components, such as water and fat, have different densities and hence different electron density. Water is heavier than fat, which is known from oil that settles on top of water when you try to mix them, and it is this contrast in electron density which causes X-rays to deflect to different degrees and eventually to form 3D-images of the sample. Figure 1 shows a 2D slice of the three dimensional structure. Areas with higher electron density appear lighter on the figure. Water thus appears light grey, while fat appears dark grey, and the glass around the sample with a high density is seen as a white ring. One may now use the electron density (greyscale) to identify the various food components and study their location and structure.

The vegetable-based cream consists of several ingredients. In addition to water and vegetable fat, it contains milk protein, stabilisers and emulsifiers. By adjusting the addition of emulsifiers, it is possible to achieve a state in which the cream continues to be fluid until you whip it to foam, whereby all the fat globules are reorganised and sticking together on the outside of the air bubbles in a three-dimensional system (see Figure 2). “It is a difficult balance, because you only want the fat globules to stick together when the cream is whipped – not if it is simply being exposed to vibration or high temperatures. When the fat globules nevertheless begin to stick together prematurely – for example due to too many shocks during transport – the cream will get a consistency reminiscent of cream cheese. It becomes a relatively hard lump that can be cut,” says Postdoctoral Researcher Merete Boegelund Munk, Department of Food Science, University of Copenhagen.

This undesirable cream cheese-like state of the vegetable cream system is nevertheless extremely interesting for researchers.

“The organisation of the fat globules and the network structure after the cream has been converted into a ‘cream cheese-like’ product is exciting because the mass is now sliceable, even though the system consists of 65% water and only 25% fat and some other ingredients and sugars. That means we have a network structure that captures a lot of water. There are many foods with similar network systems of something solid in something liquid, where the liquid is typically, but not always, water. This applies to all semi-solid and solid products such as chocolate, butter, cheese and spreads. The network of the cream cheese-like system is thus a model for something general in our food,” says Associate Professor Jens Risbo, Department of Food Science, University of Copenhagen.

It is the structure of the networks which forms a texture that makes you want to bite into a piece of chocolate and cut yourself a piece of cheese. But the structure and the networks are something of a mystery, because until now you could only see the surface and slightly underneath the surface of the food material on the microns scale and the images you could see have only been two-dimensional.

“If we eventually come to understand the structure of chocolate, we can change it and obtain exactly the consistency that we want. A lot of money is wasted because the consistency of chocolate is really hard to control, so the end product is not good enough and must be discarded. A possible future understanding of the crystal network in chocolate might mean that we will be able to develop components that prevent the chocolate from becoming grey and crumbly, and thus unsaleable. It is certainly a possibility that tomographic methods could be developed so we would be able to understand the mysteries of chocolate,” says Associate Professor, Jens Risbo, Department of Food Science, University of Copenhagen.