Verner Wheelock, the Yorkshire-based award-winning food industry training company, has announced the recipients of its first ever Excellence Awards… 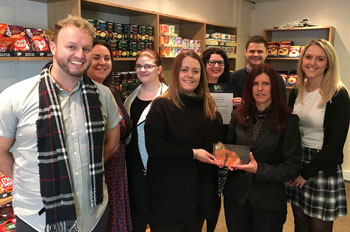 Verner Wheelock, the Yorkshire-based award-winning food industry training company, has announced the recipients of its first ever Excellence Awards. The Awards were launched in 2015 to coincide with the company’s 25th anniversary and recognise the achievements of students attending their courses throughout that year.

The winners were those students Verner Wheelock course tutors felt were outstanding. This did not necessarily mean that they had gained the highest examination results; other factors were also considered such as overcoming adversity, a passion for the subject and a desire to interact with fellow delegates and get the most out of the training experience.

Helen, Joanne and Emily were selected because each had demonstrated an exceptionally high level of competence and understanding during advanced level training in their respective subjects. The practical application of the skills they obtained will have made a significant impact on the day-to-day operations of their companies. Their aptitude was reflected in their outstanding examination results. All received distinctions.

William Ptolomey, Technical Manager at Sykes House Farm, a qualilty meat and poultry suppliers in Wetherby, won the individual Excellence Award. The tutors agreed unanimously that William was the obvious choice for this Award.

MD Alison Wheelock said “Will has undertaken several training courses with us, including Level 4 HACCP, which he found challenging but by putting the hard work in he achieved this advanced level qualification. What made him stand out is the fact that he always participates in course discussions, even if the conversation does not directly relate to his area of expertise. He’s also keen to see training filtered down through his company. As one of the tutors put it, he’s a ‘real joy to teach’.” Branded convenience food producer, Symington’s Ltd was the winner of the Verner Wheelock Company of the Year Excellence Award.

Alison commented: “We chose Symington’s for the Award because the delegates interact and put effort in. They genuinely want to learn and put their knowledge into practise in the workplace. Symington’s have a history of training with Verner Wheelock and delegates have attended a variety of courses with us. As a result we understand their business requirements and we work very well together. The delegates’ hard work is reflected in their excellent examination results and national awards.”

As a result of training with Verner Wheelock, delegates from Symingtons (Lianne Davis and Sarah Jolly-Hart) have won the RSPH Award for Level 4 Food Safety in Manufacturing for two years running by achieving the highest examination results in the UK.