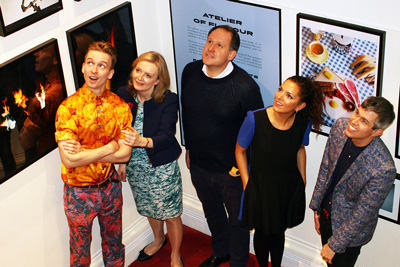 Yesterday, some of Britain’s food and drink pioneers were brought together for the first time to help to help Elizabeth Truss launch the five-year Great British Food campaign. The country’s brightest food pioneers, who are spearheading a food revolution, will drive the campaign to champion British produce and shift perceptions through leading trade missions, food festivals and sharing their knowledge and ideas.

UK emerging from “a dark age in food”

In a speech at the new British Museum of Food in London’s iconic Borough Market, Elizabeth Truss praised the contribution of these pioneers who have transformed the food landscape and set out the government’s wider ambition for our food and drink industry.

Speaking ahead of the event, she said: “The UK has emerged from a dark age in food where too often taste and quality were ignored. We are now transforming ourselves and taking our place as one of the most exciting food cultures in the world – a unique blend of tradition, innovation and openness.

“I want to harness the talent of the UK’s food pioneers to banish outdated stereotypes and ensure that British produce is people’s first choice to eat here and abroad. With the help of our pioneers, we can continue to build on the success of our food and drink exports, which have doubled over the past decade, to encourage even more companies to sell Great British produce around the world.”

As leaders of the campaign, the pioneers will help share ideas to inspire people to take real pride in our food and drink. To highlight how the British diet has evolved in the last 40 years, Defra will soon be releasing the most detailed data on families’ eating habits ever published. This will include a breakdown of every Food Survey since 1974, showing how spaghetti hoops have fallen out of favour, fresh fruit has toppled tinned and our appetite for butter has revived.

The pioneers will work together to make 2016 the Year of British Food. A series of events throughout the year will be backed by the launch of a new Food is GREAT campaign to celebrate the very best in British food across the country and overseas, and inspire people everywhere to choose British food for the best in taste and quality.

To deliver on a manifesto commitment to promote British food abroad and back British food at home, early next year will see the launch of the Great British Food Unit, joining together Defra and UKTI’s work, including through their international network in embassies, to make the government better coordinated and more effective at promoting exports, supporting inward investment and championing the excellence of British food and drink worldwide. The unit will also be supported by the work of the Food Pioneers.

The unit will work to drive-up our food and drink exports by helping more UK businesses to sell their top quality produce around the world. It will also assist in trebling the number of apprenticeships in the food and drink industry to bring new skills and ideas to ensure the pace of innovation continues to accelerate. In addition, the unit will increase the number of Protected Food Names from 64 to 200 to celebrate the rich heritage and iconic traditions of with British food and build on the importance consumers place on provenance.