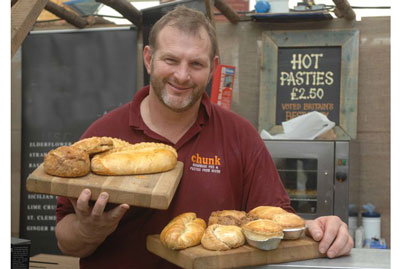 Pasty and pie makers, Chunk, are celebrating after maintaining their crown as the UK’s tastiest pasty and pie suppliers by scooping a further four national foodie accolades, with four golds from Great Taste, bringing their awards total to 60. The Company employs 30 people and is based in Ottery St Mary, Devon. Husband and wife team, Suzi and Simon Bryon-Edmond, took over the company in 2006 and invested a lot of energy and expertise into the enterprise in order to help evolve the brand into the successful operation it is today.

The pasty and pie maker wowed the judges at this year’s Great Taste 2015 event with its Steak, Chicken and Chorizo and Lamb Moroc pasties and its Chicken and Ham Squealer Pork Pie.

Chunk’s steak pasty now has a whopping 13 awards, making it the most coveted product in the range. Chunk has won more awards across its range of pies, pork pies and pasties than any other operation in the country, including gold at the British Pie Awards in 2014.

Commenting on the award-winning success of Chunk, Suzi said, “In May we secured nine awards at Taste of the West, as well as four in the ‘best steak pie’ awards from the UK’s Beef and Lamb industry standards, EBLEX. We are absolutely thrilled with the results of Great Taste and are particularly pleased with our highest achieving pie, the Chicken & Ham Pork Pie Squealer that received two stars.”

Great Taste is acknowledged as the benchmark for speciality food and drink. Organised by the Guild of Fine Food, It involves 400 foodie experts and the annual event has been described as the ‘Oscars’ of the food world and the ‘epicurean equivalent of the Booker prize’.

Chunk’s kitchen produces approximately 30,000 pies and pasties a week, stocking hundreds of outlets across the UK, including Harrods, Waitrose and smaller, independents.

Simon said, “Chunk has a very broad customer base. Kennford, down the road from our factory, is a great example of our reach, with the garage selling our pies on one side of the A38 and the racecourse across the road offering them in their restaurant.”

With a background in catering, Simon had a real desire to create a range of products that would challenge the stereotype of the unhealthy, stodgy pie. He explained, “We wanted to offer consumers top quality, tasty gourmet products, without being pompous! Our rustic gourmet pies and pasties are jam packed with locally sourced goodness. A pie or pasty doesn’t need to be unhealthy and I’m proud to say Chunk prove this.”

The brand is bold and trend setting, with its owners keen to be daring and break the mould. Chunk is also passionate about the whole process of food production and its future, acting as a thought leader on issues such as ‘Butter vs Margarine’ and Gluten Free.

Simon added, “I think it is important to be up to speed with changes in the industry and want to make sure that Chunk is constantly evolving. I enjoy researching food trends and this knowledge informs product development for the benefit of our customers.”