Coca-Cola Enterprises, Iberian Partners and Erfrischungsgetränke are to combine their businesses into a new company to be called Coca-Cola European Partners… 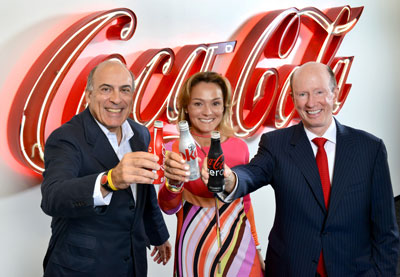 The transformational transaction will create the world’s largest independent Coca-Cola bottler based on net revenues.

“The creation of a larger, unified Coca-Cola bottling partner in Western Europe represents an important step in our global system’s evolution,” said Muhtar Kent, Chairman and Chief Executive Officer of The Coca-Cola Company. “We continue to adapt our business model to innovate, invest and grow along with the changing demands of the marketplace. With the strong leadership that will be assembled from across the three organisations, Coca-Cola European Partners will be well-positioned to deliver better and more effective service to customers throughout Western Europe and drive profitable growth across multiple beverage categories.”

Sol Daurella to be the Chairwoman of Coca-Cola European Partners

Sol Daurella, Executive Chairwoman of Coca-Cola Iberian Partners, added, “As the single-largest shareowner in this new business we will play a strong strategic role in Coca-Cola European Partners, while continuing to be close to our country, business, local consumers and customers. Combining our unique expertise in the on-premise channels, targeted marketing experience and operational excellence with the skills of CCE and CCEAG, together we will drive growth in Western Europe.”

“The creation of Coca-Cola European Partners will build on each bottler’s capabilities to create more efficient operations in their respective markets across Western Europe,” said John Brock, Chairman and Chief Executive Officer of Coca-Cola Enterprises. “We look forward to bringing together our world-class supply chain and sales team with the distinct strengths offered by CCIP and CCEAG to capture additional growth opportunities in each market.”

Ms. Daurella will become Chairwoman of Coca-Cola European Partners and Mr. Brock will become Chief Executive Officer. Both will be members of the Board of Directors.

Coca-Cola European Partners will be incorporated in the United Kingdom, one of its largest markets, with its headquarters in London. The combined company will be publicly traded with listings on the Euronext Amsterdam, the New York Stock Exchange and the Madrid Stock Exchange.