Premier Foods has unveiled a new £20m production line at its Mr. Kipling bakery in Barnsley, more than doubling capacity of its Snack Pack cake slices… 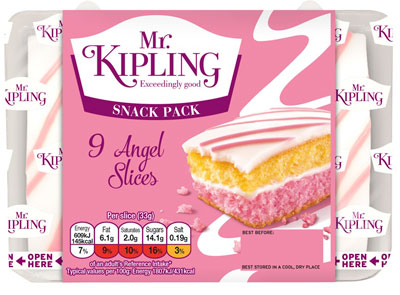 The new line was formally opened by the Rt. Hon. Elizabeth Truss MP, Secretary of State for Environment, Food and Rural Affairs, marking the introduction of innovative robotic technology at the site and the creation of 80 new jobs.

The Carlton Bakery, which celebrates its 40th anniversary this year, employs 750 people, rising to 1500 in seasonal periods. Around 80 new jobs will be created over two years, including a number of higher skilled roles. The investment will also bring wider economic benefits given Premier Foods’ aim of sourcing 70 % of its ingredients for the new slices, including wheatflour, sugar and glucose syrup, from UK suppliers and farmers.

Gavin Darby, Chief Executive Officer, said, “I’m very excited about the future for Mr.Kipling. Our cake business has grown significantly over the last 9 months and the additional capacity and flexibility from this new investment will help us improve productivity and capture new growth opportunities.”