Pasta products such as spaghetti and macaroni are usually made from wheat semolina. Wheat has a unique property of forming an extensible, elastic and cohesive mass when mixed with water due to its gluten proteins, and this lends to pasta the desired strength, integrity of cooked product and low cooking losses. Durum wheat is most commonly used for pasta as it has the right mix and concentration of gluten proteins (primarily gliadin and glutenin) for making good quality pasta. 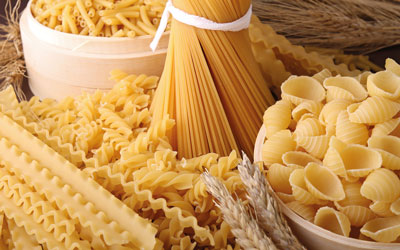 Typical pasta products that are available commercially are usually processed in a pasta press with minimal energy input (<100kJ/kg), which is adequate for kneading and forming. The pasta press is an extruder-like device with a mixing system that allows for wetting of the semolina with warm water (~40°C), followed by an extrusion barrel containing an augur or screw that imparts energy to the dough by mechanical means, and lastly a vertical die for shaping the product. The low process energy, allowing for dough development but not cooking of the product, is achieved by a combination of relatively high in-barrel moisture (~30% wet basis), small screw diameter to channel height ratio (D/H = 3-4) and low screw speed (50-60rpm). Cooling water circulating in the barrel jacket ensures that the temperature of the dough does not exceed 50°C. The final product usually requires cooking in boiling water for 10 minutes before it can be consumed.

Manufacturers are constantly exploring ways to increase the diversity of their product line and also address niche segments of consumer demand. Fast cooking or precooked pasta that requires less than five minutes of preparation time and gluten free pasta are innovations that can take advantage of advances in extrusion technology (see Figure 1). Both these categories face similar challenges that can be overcome with an under standing of the science of food matrices and the changes that take place during processing.

Pre-cooked pasta requires higher energy input during manufacturing, which is often aided by thermal energy via steam based pre-conditioning. The addition of steam leads to in-barrel moisture in the range of 40-42% wet basis. The maximum dough temperature near the die exit has to be maintained in the range of 85-95oC, and cooling becomes very critical in order to keep steam from forming blisters on the product surface. A water-based cooling system is not adequate for this purpose.

Twin screw extrusion technology (Figure 2) allows flexibility in the process to achieve cooking followed by in-line cooling using a special vacuum venting system. The screw profile is designed to create a decompression zone within the extruder with the help of immediately upstream reverse flow elements. In this relatively low fill zone, a vacuum line attached to the barrel allows venting of steam. The high latent heat of vaporisation of water helps to cool the dough from above 100oC in the upstream cooking steam zone to 70-80oC in the vacuum zone, while the dough moisture is reduced to 35-38% wet basis (Figure 3). Air trapped in the dough is also removed during vacuum venting, which helps in improving the end product quality similar to the pre-extrusion vacuum in the traditional pasta press process.

Energy input in the pre-cooked pasta process is in the range of 150-200kJ/kg in order to achieve cooking in addition to kneading and forming. Besides steam injection in the preconditioner, higher extruder screw speed (150-200 rpm) and D/H ratio (8-10) also allow for greater mechanical input than the pasta press. However a unique challenge is presented in dough development, as the gluten proteins get completely denatured and lose the ability to provide a viscoelastic and cohesive network. This is countered to a certain extent by a reversal of roles of protein and starch in the product matrix. It is the gelatinised starch that provides the cohesion and strength to pre-cooked pasta and not proteins.

The extrusion process should be optimised to minimise the macromolecular degradation of starch otherwise cooking quality of the product would be compromised. Use of dough conditioners, such as monoglycerides, helps in reducing starch damage and lowering surface adhesion. The latter prevents the product from sticking together and allows better cutting on exit from the die. The last step in the process is drying, which is very critical for product quality. The pasta can develop cracks if proper care is not taken to design the drying conditions to be mild and gradual. Usually, long retention times (~one hour), low air temperature (~70oC) and high humidity conditions are employed for this purpose.

Studies in our lab have shown that pre-cooked pasta based on wheat semolina, manufactured using the above mentioned twin screw extrusion process, has similar quality attributes such as water absorption during boiling as traditional pasta, although visual appearance might be slightly compromised.

Production of gluten free pasta for consumers who prefer such products as a lifestyle choice or due to gluten intolerance also poses similar challenges. In this case, the use of ingredients other than wheat is necessary. Rice and sorghum are examples of gluten free ingredients but lack the protein quality and dough forming properties necessary for good quality pasta. The twin screw extrusion process described above can overcome this challenge as it can gelatinise starch to form a continuous and cohesive matrix in the absence of gluten proteins. Often, other ingredients such as starches and gums are also used in the formulation of gluten-free pasta products in order to enhance their quality1,2.

The quality characteristics of sorghum-based pasta, produced using a pilot scale twin screw extruder (Wenger Manufacturing, Sabetha, Kansas, USA), was evaluated in a study in our lab3. Differential scanning calorimetry data indicated absence of an endothermic peak in a typical temperature scan, thus verifying that starch was completely gelatinised during the process. Cooking time in boiling water for sorghum-based pasta ranged from 5.5-7 minutes, and was significantly lower as compared with the semolina-based commercial product. The cooking loss ranged from 4 to 6%, and was at the same level as the commercial product. Results from a consumer evaluation study indicated that although the commercial product had better ratings for attributes such as appearance, chewiness, flavour and overall acceptability, sorghum-based pasta had a higher than neutral rating for overall acceptability.

To summarise, manufacture of pre-cooked and gluten-free pasta products present similar challenges due to the absence of functional proteins that can provide a strong, viscoelastic and cohesive matrix either due to denaturation during the process or the type of ingredients used.

The versatility of the extrusion process can be used to overcome these challenges effectively, and the solution involves a role reversal in which gelatinised starch forms the continuous phase in the product rather than functional proteins.

Dr Sajid Alavi is Professor of Extrusion Processing in the Department of Grain Science and Industry at Kansas State University. He received his PhD in Food Science/Food Engineering from Cornell University in 2002. His research activities are focused in the areas of food engineering, extrusion processing for food, pet food, feed and industrial applications, food microstructure imaging, and structure-texture relationships. He has more than 75 peer reviewed publications, feature articles, edited books and book chapters to his credit. In 2010, he received the Young Research Scientist Award from AACC International, formerly the American Association of Cereal Chemists. He has provided training and networking opportunities to 800 industry leaders from 30 countries spanning all six continents through the internationally reputed short course ‘Extrusion Processing: Technology and Commercialization’ and similar offerings. The next edition of the KSU extrusion short course will be offered from 11-14 August 2015. Details can be obtained from the website: www.grains.k-state.edu/igp.