The early years of life are a period of very rapid growth and development. Many organs including the gastrointestinal tract, pancreas, adipose tissue and the brain are still under development in infancy and toddlerhood. Body size doubles and body weight increases five-fold in this period of time. Two grams of brain are added every day1. In this critical phase of childhood, the foundation is laid for a healthy life. The risk of becoming overweight in childhood starts in the first year of life. Subsequent rapid increases in Body Mass Index (BMI) further aggravate the risk of becoming obese2,3. 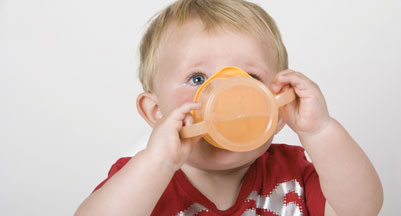 It is thought that the maturation of organs is adapted to the nutritional environment in this critical period of development. An excess of energy, unbalances in macronutrient quality or nutritional deficiencies are inappropriate nutritional signals, which may lead to e.g. metabolic disturbances or the development of obesity4-7. Early life is also a crucial phase for the development of healthy eating habits. There is a window of opportunity to form food preferences, and by repeated exposure and offering variety, children learn to accept many different tastes8-10 and these preferences subsequently track into childhood and beyond11-14. In this review, we summarise the possible negative effects of excess sugar and sweetness in products for infants and young children. At the end of the paper we share the commitment and approach of Danone Nutricia Early Life Nutrition in improving its portfolio.

There has been a dramatic increase in the prevalence of childhood overweight and obesity in the last three decades in developed countries, and the problem is emerging in low-income countries15. Excess weight is associated with a higher prevalence of cardiovascular and metabolic diseases, including Type 2 diabetes, dyslipidemia, hypertension, atherosclerosis and non-alcoholic fatty liver disease later in life16. The number of studies investigating the relationship between total sugar intake in children and obesity risk is small, partly because of the small number of countries that have good sugar intake data. Studies conducted in populations of children demonstrate positive associations between intake of sugar and BMI17-19.

A more strongly established relationship is between the intake of sugar coming from sweetened beverages and body weight development, possibly because liquid sugars do not give the right sense of satiety. Several observational studies indicate that a greater consumption of sugar-sweetened beverages, including sugared fruit juices and drinks and carbonated beverages, is associated with weight gain and obesity22,23. In an intervention study by de Ruyter et al24, sugar-containing beverages were replaced by non-caloric beverages in normal weight children. A reduction of weight gain and fat accumulation was observed. There seems to be sufficient evidence for public health strategies which discourage overconsumption of sugary drinks25.

Negative impact on the development of healthy eating habits

Human infants are born with an innate preference for sweet, shown by typical facial expressions indicating relaxation when they are exposed to sweetness26, 27. Sweet foods are often energy-rich, which may explain the preference for sweetness, as energy is needed for optimal growth and development28,29. Most infants and toddlers prefer a sweet solution over water30 and breast milk also has a sweet taste31. During the first year of life, inter-individual differences in sweet taste acceptance become bigger11,12. Experience with sweet foods and beverages may modulate a child’s sweetness preference and their consumption pattern. Early exposure to sugar increases the preference and consumption of sugared and sweetened products later in childhood11-14.

Interference with the intake of other nutrients

Another suggested adverse consequence of excess sugars is its effect on the intake of other nutrients. Most studies do not find an association of sugar intake with total energy intake. As fruit juices may replace milk drinks when infants get older, a shift in micronutrient intake may occur32. Intakes of specific micronutrients such as calcium, zinc, thiamin, riboflavin, niacin and folate have shown to be reduced with increasing sugar intakes, but generally stay well above recommended intakes for children17,33.

Dental caries is a bacterial infection that causes demineralisation and destruction of the hard tissue of the teeth. It is a result of the production of acids by bacterial fermentation of foods that are present in the mouth. The form of caries seen in young children is called Early Childhood Caries, which can affect both the front teeth as well as molars. Sucrose is highly cariogenic and a study by Karjaleinen et al shows that sucrose intakes at three years of age is higher in those who developed caries by the age of six34. Similar results were shown in the British National Diet and Nutrition Survey (NDNS) of pre-school children aged 1.5 to 4.5 years in which the consumption of non-milk extrinsic sugars was related to caries incidence35. The relationship between sugars and dental caries is complex as oral hygiene is a confounding factor. Reducing frequency of consumption of sugar containing foods and improving oral hygiene may have a large impact on incidence of dental caries.

Reducing sugar and sweetness in products for infants and young children

Danone Nutricia Early Life Nutrition (ELN) has a strong commitment to limit the amount of sugar in products intended for infants and young children. Specific minimum and optimum nutritional standards have been developed per category as reference values for product development. All categories are included, such as milk-based formulae, growing-up milks, cereal-based foods, savoury dishes, fruit-drinks and dairy based dishes. Minimum standards are mandatory for all products in the ELN product portfolio. They are there to help us continuously push for improvement, while at the same time taking into consideration the variations in eating habits and cultural practices in our markets around the world. Optimum standards represent our final ambition and will drive the nutritional quality of our products in the long run. Optimum standards are based on the latest science and are set to deliver the most significant benefits to infants and toddlers. The optimum standard for sugar content for all these categories is ‘no sugar added’. ELN aims to meet optimum standards in as many products as possible. A sugar reduction program was launched in 2010, with the aim to reduce 20 per cent of sugar in products by 2015. Figure 1 shows that the actual reduction was almost 14 per cent by 2012 and the first estimates for 2013 are 15 per cent reduction.

Several challenges can be identified when reducing sugar in products intended for infants and young children. Although it is relatively easy to get young infants to adapt to a non-sweet taste36, the mothers’ taste is often the reference. She will try the food and may reject products that are not sweet enough. Cultural determinants in a preference for sweet foods may be strong. The risk is to lose consumers to non baby-specific foods or competitor products with high sweetness. In addition, parents are not always interested or aware of the long-term health consequences of excess sugar intake.

Successful launches of reformulated products within ELN were often done without any specific communication to parents or health care professionals. A stepwise reduction of sugar was shown to avoid losing consumers after launch.

In summary, reduction of sugar and sweetness is relevant and realistic in products intended for infants and young children.