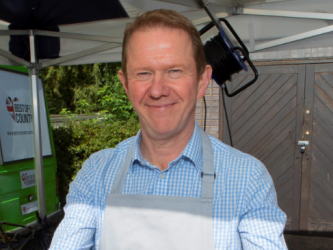 Phil joined the UK’s largest independent Co-operative in April 2015 as Group General Manager, Food Retail, responsible for the food retail business.  He was later appointed as Chief Executive (Trading) with responsibility for the Food, Healthcare, Childcare nurseries, Travel and Funeral businesses, before attaining the role of Group Chief Executive Officer in July 2018.  He is a Board member of the Federal Retail Trading Services group, which binds the relationship between the UK’s co-operatives.

Prior to joining Midcounties Phil was at the Southern Co-operative, where he was Chief Operating Officer for seven years.

Whilst Phil’s early career included four years as General Manager of one the country’s largest Hypermarkets, he is passionate about small store retailing and community relations.  He is a Board member of the Association of Convenience Stores (ACS).

Since arriving at Midcounties Co-operative Phil has restructured its food business, implemented a strategic change programme to develop more effective ways of working and enhanced its credibility in food retailing through the development of the Best of our Counties local sourcing programme, which showcases more than 200 local suppliers.

Phil firmly believes in the purity of food and transparency in provenance.  He is a member of the Happerley Advisory Board which is a scheme focused on improving traceability in food by auditing the supply change and allowing consumers to verify the origins of their food and food ingredients.